Yes, It’s finally finished!  I’ve only had the top finished since the end of May, so I suppose two solid weeks of quilting isn’t ridiculous, but it seems like forever.  Maybe because we #twilters and others started this mystery quilt late last fall as we gathered and cut our scraps.  Maybe because we pieced along all winter and early spring as the design was revealed. Maybe because by the time I assembled it, the blocks weren’t exactly, um, flat.  But now it’s done, and very pretty! 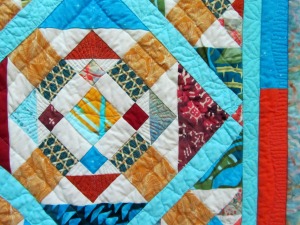 To deal with the waviness, after I had spray basted this quilt, I machine basted it through all the blocks with water-soluble thread.  Then I abandoned my original quilting thoughts for a design that fell mostly on the seam lines and in the flatter spaces.

It all washed up pretty flat and straight in the end.  Some of the quilting lines look like I was under the influence of something, but that’s what happens when you quilt over bumpy ground.  All in all, it’s very successful.  I love the colors I used.  I’m keeping this one, at least for a while.

Thanks to Charlotte for designing this and guiding us through it, and all of the other participants.  Always fun to work together.  See our diverse results here.

I’m linking up to WIPs Be Gone at A Quilting Reader’s Garden.

No new fabric came in this week.  I was in a quilt shop, but it was to drop off donations, and they didn’t have the one fabric I needed, so I was very good.  I finished this Quilt of Valor, so that’s ten and a half yards out.

Certainly headed in the right direction! 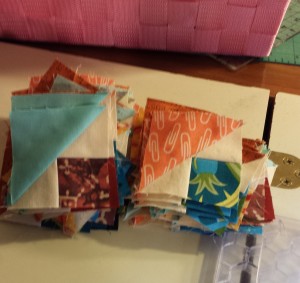 I did pretty well on the January Goals, completing four of the six.  All the snow has been helpful, but when the weather was better we went out a lot, so I didn’t sew nearly every day.

6. Complete Step One on Charlotte’s Scrap in a Box Mystery Quilt.  Yes!  Here.

Yesterday I pulled fabrics, cut, and did the preliminary piecing on the D4P quilt, so I have a good start on that.  Our snowstorm fizzled out here, but I’m still taking it as a Sew Day!

Hope you are making the progress you wish.  I’m linking up to Patchwork Times.

Today I got out the fabrics I had cut in November?  October? for Scrap in the Box, this year’s Scrapitude mystery quilt by Charlotte.  Many of us #Twilters on Twitter are doing this.  You can certainly join in- this is only the first clue. 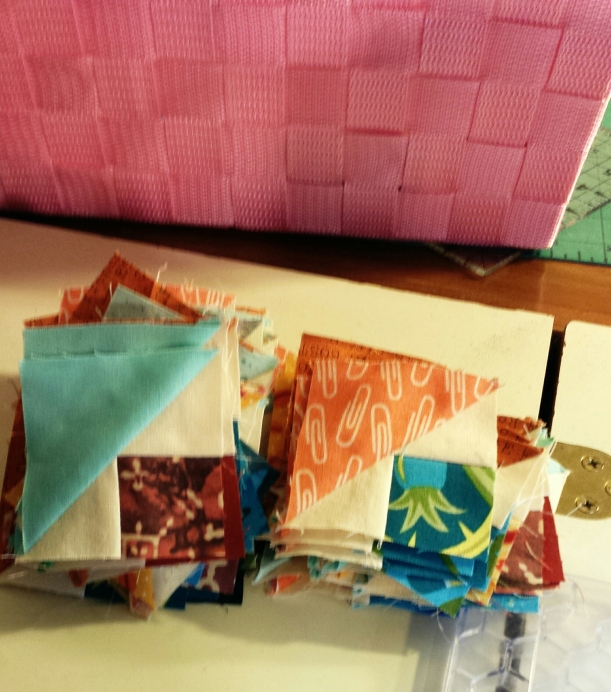 There were teeny, tiny pieces to put together, but I got them pieced in a few hours, so now I’m waiting to see what everyone elses looks like, and for next month’s clue.

Some of the sale fabrics I bought were these two adorable elephant prints.  What’s so cute about elephants?  I don’t know, but I had a great time sewing up these two baby quilts. 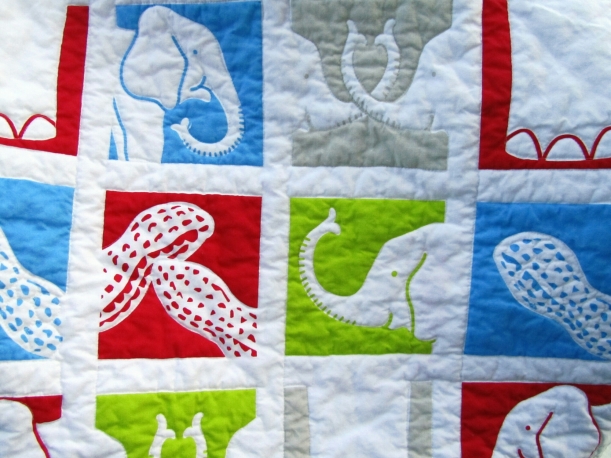 The primary colored one is just the whole fabric (I did a bit of piecing on the back), but it was good practice free motion quilting it,

and I finished with a special binding.

The teal elephants are a brushed cotton/linen blend, my first time using one.

END_OF_DOCUMENT_TOKEN_TO_BE_REPLACED

Last fall, Sandy‘s friend, Charlotte, started a mystery quilt named Scrapitude with their guild.  Sandy asked to post the steps on her blog, and the rest is history.  Her readers and many of us on Twitter (#Twilters)  grabbed our scraps and got started cutting.  This was my first mystery quilt, so I wasn’t sure what to expect, but I knew that Charlotte does beautiful work with scraps.  I had trouble letting go of control of colors, and I didn’t completely, but this is the scrappiest thing I’ve made.  And it turned out pretty well.

I started with these.

They looked like this all cut up.  I decided to use several shell pinks for the background pieces. 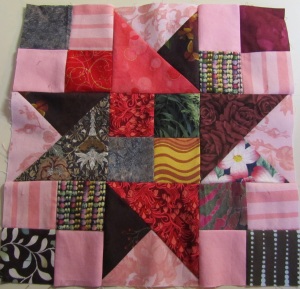 From those pieces we made these blocks. 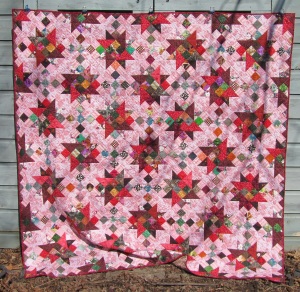 And now I have this quilt (80″ square).  Yes, it’s very pink.  I think the colors work really well together, but I hadn’t realized it would be quite so …pink.  It is cheery and fun to look at, with all the different fabrics.  It will live in my guest room, so people will get it in small doses. 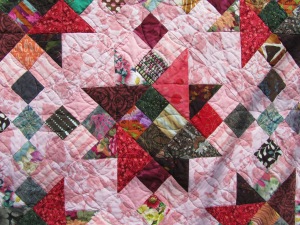 I stitched the stars in the ditch, with an orange peel in the centers, using an “old rose” colored Bottom Line thread.  I quilted the whole pink background with an unmarked orange peel motif in pale pink.  I had a lot of fun with that part, and I really like the texture. 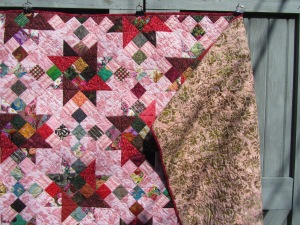 The back is shell pink and olive batik.

It was lots of fun to sew these with everyone else, but the best part is seeing how differently they are all turning out.  Keep checking this Flickr group to see the progress.

I’m linking up with Whoop Whoop Friday at Confessions of a Fabric Addict. 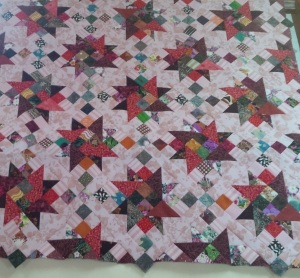 Here is a portion of the finished Scrapitude quilt top.  It’s about 80″ square, so it’s hard to get a picture of all of it.  I’m happy with results.  The background is several shell pink fabrics, which give it a warm look.  See more results from various quiltmakers at the Flickr page.

I have about 3/4 of the quilting finished, and I like it a lot.  I’m especially enjoying the orange peel/overlapping circle motif I’m doing in the background.  It’s very relaxing to do.

I’m linking up to WIP Wednesday at Freshly Pieced. 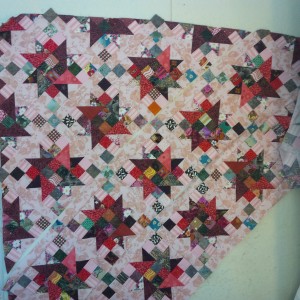 This week I finished the two commissions (pics on Friday!), and started putting the Scrapitude top together.  I was a little intimidated by it, but it’s going together pretty well.  I don’t set blocks on point very often, and I tend to get confused about it, but so far, so good.  There isn’t room to lay it all out.  I have more than half the blocks together, and just need to join these rows, and make the last three.  We’ve been discussing borders, but I think I’m just going to bind it the way it is.  It’s for my guest room, and I don’t want it too big.

Hope you’re making progress on your projects.
I’m linking up with WIP Wednesday at Freshly Pieced.

Well, we’re four days into February, and it just occurred to me to write this post.  One of those years?  Oh, well.

And it doesn’t look to me like Judy is continuing this link-up at Patchwork Times.  Does anyone know if I’ve missed it, or if she’s quit, or if anyone took it over?  I think I’ll still do it here, but it was fun to connect with everyone.  The goals didn’t work very well for Judy, but they did for me!

Okay.  You see the problem with this month was that I had some extra time during the snowy weather, so I started piecing strings, which became Bright Strings, which demanded a border, which demanded some fancy quilting, so it dominated my month without even being on the list.  Then the #Twilters talked me into the Disappearing Pinwheels Quiltalong, with which we had/are having a ball.   That’s my story.  These quilts did further some of my goals for the year, though.  While not a planned Slow Quilt, Bright Strings did grow into a slower project with a lot of design decisions.  Both quilts used a ton of stash.  And I quilted something besides feathers!  So, no regrets.

On the commission quilts, I did select fabrics and settle on final designs with the customer, and I’ve made some sewing progress on one this month.

I’d like to work on the Disappearing Pinwheels, too, but it’s a short month, and I have hopes of getting my back into good enough shape where I can go back to Step class, so I’ll just stick with the four goals.

I hope you’re staying safe and warm in this weather, and making progress on your goals.

Please let me know if you know anything about the Getting It Done challenge.

(And I am not doing the Crumb Challenge, no matter how many other #Twilters do.  Just so you know.  😉

I found a few hours on Monday and Tuesday to get caught up on Step 4 (parts 1 and 2) of the Scrapitude Mystery Quilt that many of us are doing through Sandy’s blog, Quilting for the Rest of Us.  It went together very quickly and very neatly.  Occasionally, I had difficulty turning patches correctly, but that was my own perceptual problem.  I quickly learned to check before I sewed!  I am pretty happy with the way this is turning out.  It is very scrappy.  I wish I had used more variety in the largest triangles, but I think it will be fine.  This is my first mystery quilt, and the scrappiest thing I’ve done so far.

I’m linking up with WIP Wednesday and Scraptitude Linky Party.

Well, I missed the linkup, but I’ll put this out here anyway for those of you who follow.

I have finished the stitch-in-the-ditch stabilizing quilting between all the blocks on the Brights quilt, which means it looks like nothing at all has been done to it.  One tip I remembered as I did this was to stitch in the same direction on both sides of each row of sashing , so that it wouldn’t distort.  You can probably guess how I learned this…

Today I’m on to quilting the sashing, probably with wavy lines using the walking foot, and then fmq-ing the blocks and borders with paisley designs.

Meanwhile those quilters on Twitter, known as the #Twilters, have drummed up a new quilting bee. 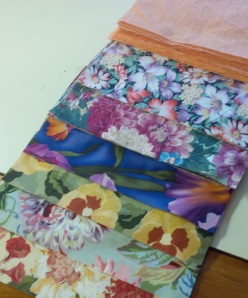 We’re all going to make our own versions of the Missouri Star Quilt Co.’s “Disappearing Pinwheel”

quilt.  Find the links to the tutorials on Gretchen’s blog, 120 Blocks.  We’re going to work on these

during our Martin Luther King Day Sew-In ( #MLKSI ).  In typical #Twilter fashion, this is morphing into a whole weekend of fun and silliness, so check out the blogs and podcasts to see what’s going on.  Google Hangouts have been mentioned (still no success fixing my webcam…), and there will probably be a Flickr group, so you can participate even if you’re not a Twitter person.  I hope you’ll join us.

This is a perfect project to use with two layer cakes, but I don’t have any, so I dug into my stash.  I  came up with a great batch of large-scale florals and big dots/circles, and this peach blender to serve as my solid.  After editing for contrast, the dots failed to make the cut, but I’m excited about what I have.  I’ve starched, pressed, and cut my 60 10″ squares, and I’m ready to go on Monday.  Or sooner

if they talk me into it.

And the new step has been released for Scrapitude, so I’ll be plenty busy.

Hope you’re make progress on something. 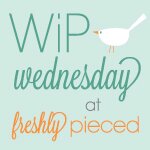 This week I’ve been playing with HSTs in grays and aqua through turquoise.  I’m trying to do something interesting with the color transition, but I don’t know if I have.   I sewed half of them together wrong, so I had to rip apart my nice, pressed open, unstretched blocks and sew them back together, probably all stretched out.

Also, I completed Step 3 in the Scrapitude Mystery Quilt at Quilting for the Rest of Us.  Each of these steps is pretty quick, and we’re skipping December, so you could certainly catch up if you want to join us.

What are you working on?

I’m linking up to WIP Wednesday at Freshly Pieced.