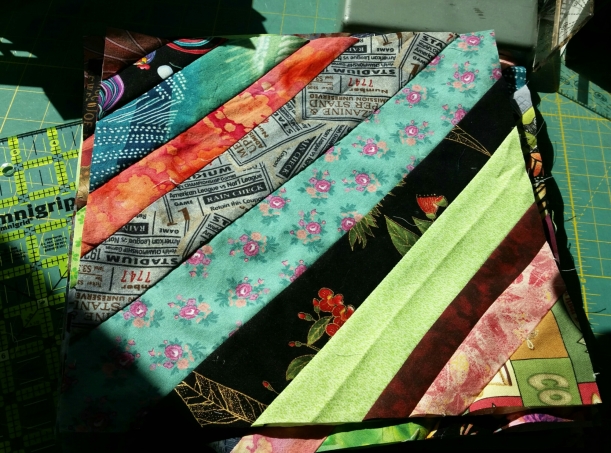 This week I began climbing the stairs up to my studio and sitting at the machine for half an hour or so at a time.  My knee is not pleased to be bent that long, much less push on the foot pedal, so I have to take breaks and walk around to stretch it out.

I did succeed in making a dozen 10 1/2″ string blocks for Kat’s October drive.  A good way to get back into sewing. 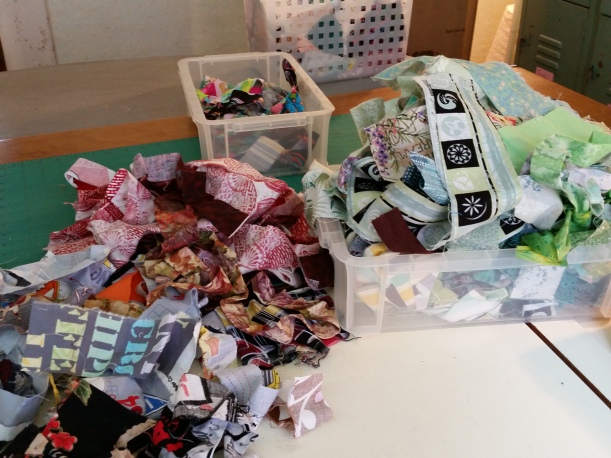 And yet, I can’t see any reduction in my strings… 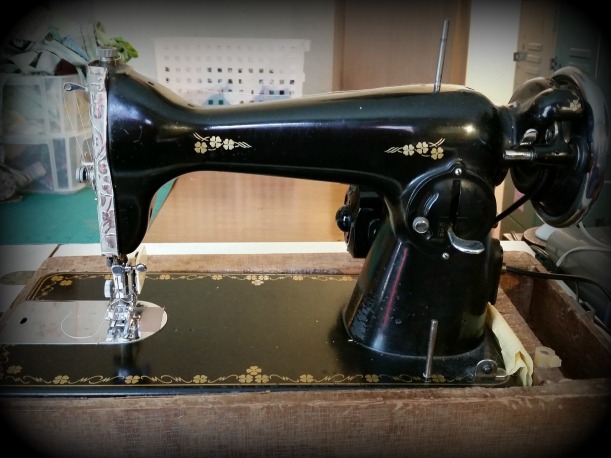 My Bernina machine has been away at the spa while I was healing (getting her back today!), so I used this one instead.  This is SueAnn, a White, from the ’30s, I’m guessing?  Help me out if you know.

This is the machine on which I learned to sew.  When my parents were first married, my dad worked at the Boston Store in Erie, PA.  They took used machines on trade-in, and had a sale on treadles for, like, $10.  My mom had no machine, so she asked for one of those, but instead my dad brought home this used electric and the cabinet, which I don’t have.  All our clothes were made on this until my mom won a new machine when I was 11, and I started sewing on this one. 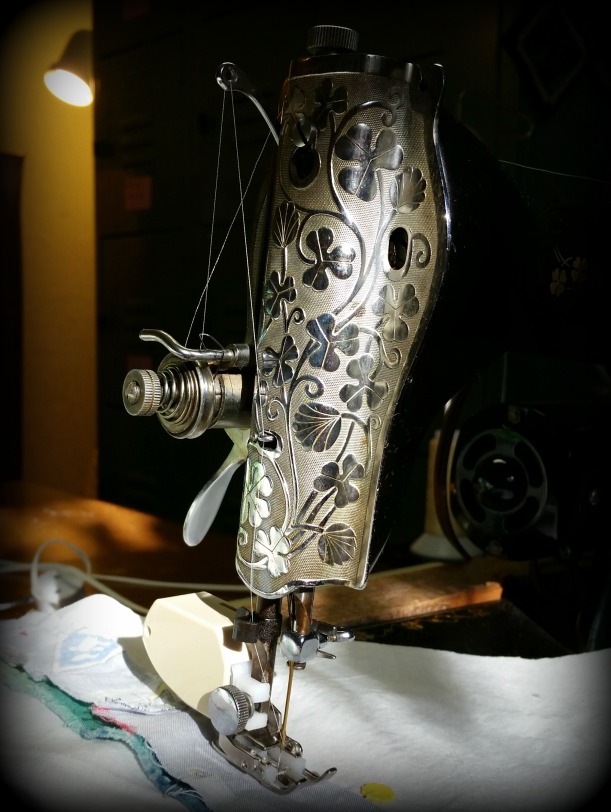 I had a moment of panic when I went to thread her, but I just went ahead and let muscle memory take over, which seemed to work.  It’s not much different from a modern machine, but on the end instead of the front, and the bobbin and needle are turned sideways as well. 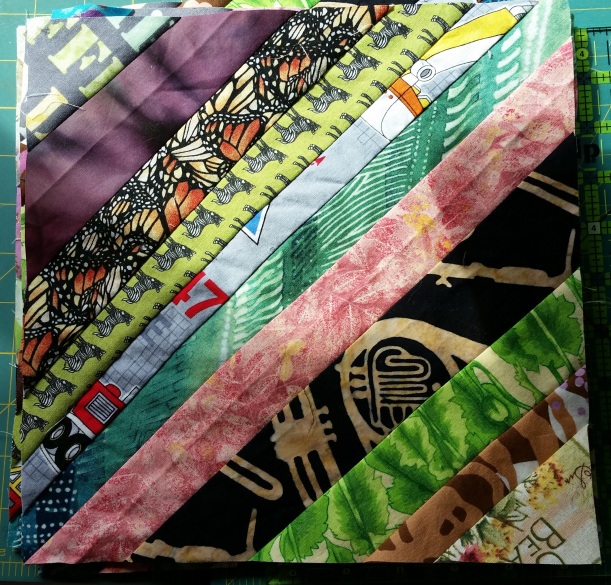 I have put the feet away somewhere, a very safe place, Jaye suggests, and I still can’t find them.  I used this walking foot, and, really, it wasn’t a bad choice for stitching the strings to a muslin background.  I like the way this machine purrs along.  In my dream studio I’d keep it set up in a cabinet.

Now I’m working on the design of that neutral Christmas quilt, and hope to do some cutting and organizing until my knee wants to sew some more! 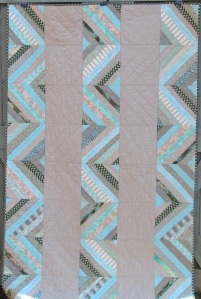 Lately, it seems as though all I do is show you finishes.  One day soon, I hope to have some more interesting content, but I haven’t had much energy lately, and it seems like all I can do to post occasionally about what I’m making.  So many of you are more inspirational!  I’ll try to get back there.

I had fun setting and quilting my favorite string blocks in a new way.  The gray is Kona Ash.  The thread is Coats and Clarks, an older spool that was the perfect colors.  It worked out well that I have this to add to my Etsy shop, because a few days ago I sold the aqua and gray chevron quilt that I had there.  It went to Denmark, which seems fun.  My quilts have been so many places I haven’t yet! 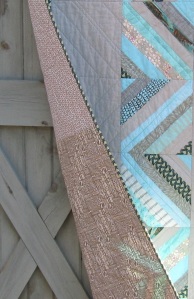 I’m pretty happy with the way it turned out.  The quilting could be more defined. (I think it’s better in person than in these photos.)  What if I had had the patience to use decorative stitches in the solid areas?  Hmmm. 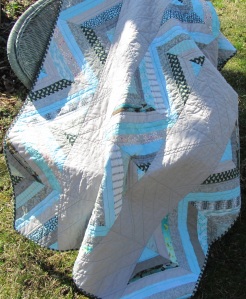 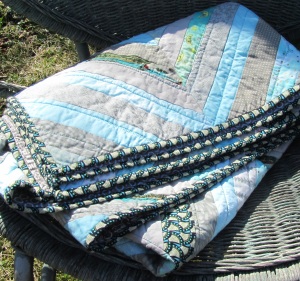 Hope you’ve had some good finishes lately.  I’m linking up with Finish It Up Friday, at Crazy Mom Quilts. 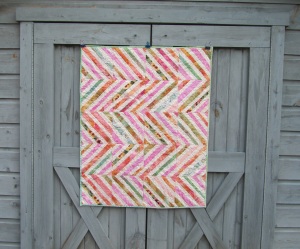 Late last week I finished up my baby-sized string quilt.  Then one day I dashed out between the snow and the sleet to take a few pictures. 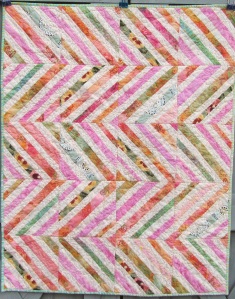 The blocks are 9 inches, pieced on paper.  The sherbet colors are all strings from my bins, but the cream floral was yardage.  It was a good use for  an older piece of fabric, and I had just enough. 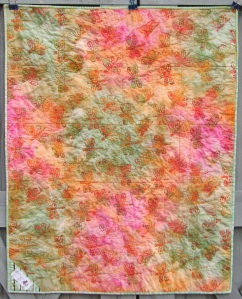 This was inspired by the batik backing I had left over from Disappearing Pinwheels. 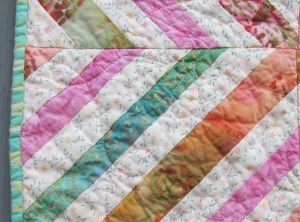 I stitched between all the blocks with the walking foot.  Then I flipped it over and quilted all the dragonflies, using white Sulky rayon in the bobbin. (Well, I skipped the side-view dragonflies, because I found they didn’t look like anything identifiable from the front.)  The Sulky isn’t very heavy, so the design on the front is subtle, but I like it that way.  It’s there if you look for it. 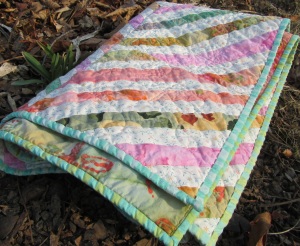 I used a green with a variegated stripe for the binding.  No new techniques this time, except for a different layout for the string blocks.

Hope you are enjoying the satisfaction of finishing things this week.

I’m linking up with TGIFF and Whoop Whoop Friday.  (Please DO NOT go over to Confessions of a Fabric Addict, because *I* want to win her great giveaway!) 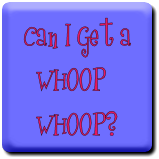 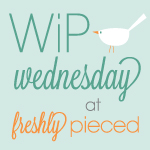 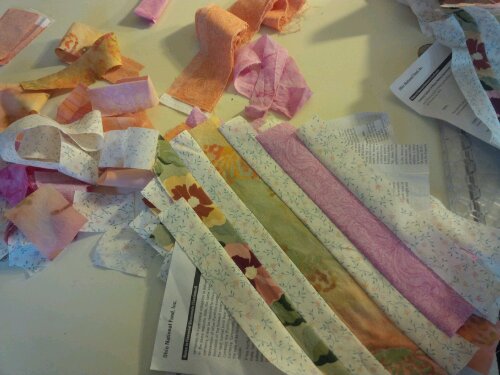 This week I finished two construction-themed baby quilts (pictures coming!), and started a project making throw pillow covers from a vintage tablecloth.  That stalled because I didn’t have the fabric I wanted for the backs, so I ordered some (sorry, Stash!).  While waiting for that, I started some string blocks using the trimmings of dragonfly batik from the back of the Pinwheels.  Yes, some of the pansy fabric got in there, too.  This will be another baby quilt, with the blocks set to make zig zags.  I have enough of the batik left for the backing, too.  Yum!

Hope your projects are progressing nicely.
I’m linking up with WIP Wednesday http://www.freshlypieced.com/2014/03/wip-wednesday-stacking-cutting-stitching.html?m=1 at Freshly Pieced. 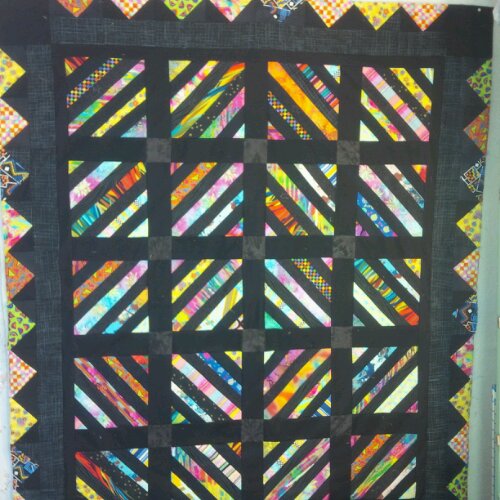 I finished the Brights top today, and I only had to put the borders on twice to get them right!  It’s too large (about 60 x 80″) to get a good picture, but you get the idea. 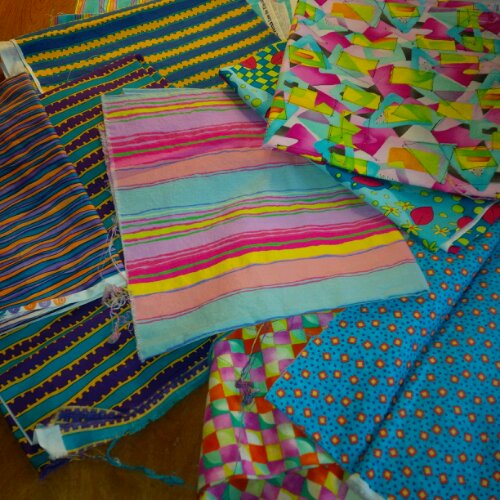 Now I’m looking at fabrics for the back.  I don’t have four yards of anything remotely coordinating, but I do have all these brights, so I think I’ll cut them into large squares and piece them together. Which may procuce more bright strings, and I’ll be right back where I started…hmmm.

Quilting:  what do you think?  I’m thinking of doing all the quilting in a shiney black thread, or shiney dark gray.  Or maybe a varigated colorful thread on just the black borders.  Any ideas for color or motif?

Hope you’ve all made the progress you want.  I’m linking up to WIP Wednesday at Freshly Pieced. 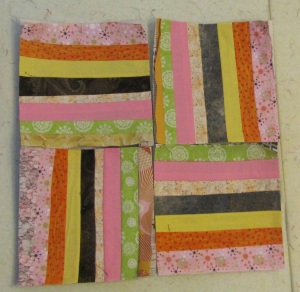 Using strings to make some Springtime pillow covers for living room pillows.  Yes, they look a lot like the Christmas ones in different colors, but I really like those.  So much so that they are still on the pillows…my last vestige of Christmas.  Also, my strings continue to overflow their containers.  I can’t tell the difference after pulling the strings for these six covers, but it has to be helping.

I’m linking up to Design Wall Monday at Patchwork Times.